Was oddly wide awake at stupid o'clock today, and since it's high time for an update, I thought some Monday morning pictures were in order. The bad news is that the Magic Plastic only lasts a couple of days, and so I've gone back to the drawing board on the bubble hat (boo hiss). In the meantime though, I've got a lot of new things on the go...

A chip off the old block
Probably the most exciting development is that my Dad is making me some blocks which will potentially save me a fortune!! Handmade, quality blocks are works of art in themselves, and therefore (understandably) pretty pricey. After much research, we've invested in an enormous plank of flawless African Obeche, and Dad kicked off the first button block yesterday - I'll keep you posted on his progress...!
Buttons, origami and

the Great Ping Pong Discovery
I had a great two days with Rose in London too - two buttons (a 17" round silk on canvas foundation for the Hummingbird Project, and a 19&1/2" cerise wool felt button for some felt and feather spiral experimentation) as well as a monster brim for a black sinamay showstopper.

In the meantime, I've also finally found the guidelines to make an absolutely beautiful origami swan that I fell in love with about two months ago but couldn't work out the folds. I've been practising in paper so far, but today's objective is to try an enormous half metre model to see how it'll work as a hat - the wings will be slightly differently arranged to sit across the face with veiling.
After my sister found some great instructions in an origami book (thanks Natalie!), I've also folded this little chap who's now just awaiting a small black button base on which to perform. I love him!!
This led to the Great Ping Pong Discovery - I'm not sure how the more traditional milliners will feel about this, but I've spent a lot of time over the weekend nail varnishing ping pong balls, I love the look!
The three black ones are for a tulle 'cloud' fascinator for a wedding I've got coming up, complete with sequins, glitter and magpies (three for a wedding!)

Hessian experiments
The hessian hat is also coming along nicely, although suitable decorative ideas have been proving elusive. After four hours (!!) of deeply unsatisfactory experimentation last week, I finally discovered what i think is a pretty cool setting for the silk velvet pansies - I'm a massive fan of lasers, and these really remind me of them! I had originally intended to use a daisy chain, and eventually settled on a wire setting. Which is your favourite? 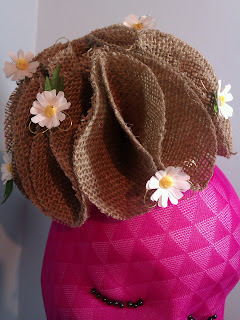 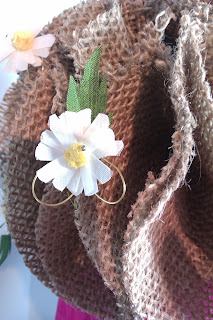 Daisy chain: Silk dupion and velvet daisies with wire setting on a stiffened hessian base 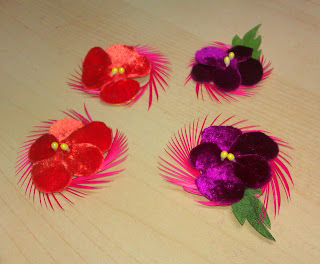 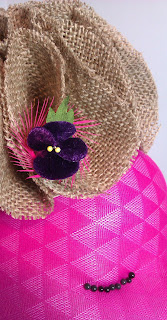 Handmade Mondays
Finally, I've recently discovered this fabulous crafty community on Handmade Harbour, and so I've joined the party - partly to hopefully secure some more followers, partly because I think it's a genuinely lovely idea, but mainly because I love beng nosy about other creative people's endeavours! Today is my first linked post - regular Monday updates to follow!
Posted by EleanorLucy Millinery at 01:45