Morning all! First things first - the thumb's better at last!! Never again!! Whilst it was getting better, pinning taut fabric onto a wooden block was out of the question, so I've been making some (in my humble opinion) rather lovely knitted and sewn Christmas presents - can't show you photos until after the big day though as the intended receivers definitely read the blog! It's been nice to get back to doing some old school crafting, I don't get quite the same buzz as when I've finished a hat, but my goodness it's faster and a lot of fun!! I have managed to squeeze in some hatting too of course. Nothing has quite got to finished stage yet as I've run out of wire and tubular crin, so I've been blocking and making hat decoration, as well as indulging in some velvet experimentation. This does mean that I now HAVE to get The (mahoosive and slightly scary supplies) Order in this week, so every cloud I guess...

The liquorice all sorts are coming along nicely, had a lot of fun doing these! I'm going to glue the little plain blue and pink and roll them through some seed beads to give them the sprinkled look - I think it's going to get messy!
I love the colours within this nude silk dupion - this is the first time I've made a silk cover on a canvas foundation without Rose! The sequin wing design kind of evolved on its own via the seams and pattern of the bias through the fabric, like the hat knew what it wanted to be before I did! I'm pleased with our joint effort, the only problem is that now I want to keep it! 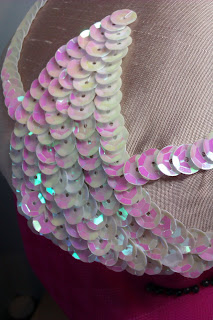 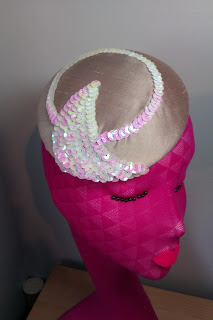 I haven't made a velvet hat before, but one of my fellow Rose-addicts and I have decided to swap the skills we've learned already to accelerate our learnings. She described how to cover a canvas foundation with gathered velvet - it's worked (woop!) but I think I've over handled the velvet as the sheen could be glossier. I'm actually surprised there's any velvet left on the hat, given the amount that seemed to be in my eyes, up my nose and in my mouth!! Still, as a first attempt it's definitely wearable - I'm going to crown the gathering with a plume of natural guinea fowl feathers, the contrast against the velvet is gorgeous! 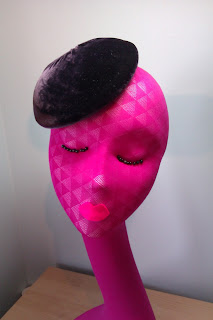 I picked up some really interesting loose weave woollen fabric from the offcuts box at Macculloch & Wallis - as with most of their stuff, I paid more than I'd have liked, but it's great quality and I knew it would lend itself well to a hat. I also realised this week that I should probably be making a Spring / Summer collection rather than winter warmers (whoops!) so I rustled up some irises (I'm getting good at making up flowers now!) to nod happily on top. 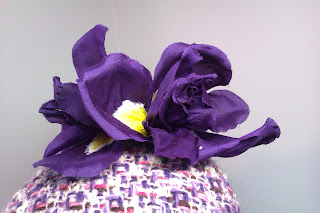 Finally for this week, I've christened my bespoke tricorn block - this is going to be a deep navy percher with pearl beading. The rope and ribbon help to push the felt into the dips in the block so that it retains a cushioned effect - once I've got crin, wire, a headband and felt stiffener, I can take it off the block and start beading!
Handmade Monday
There's a festive frenzy at Handmade Harbour this week - pop over and get inspired! Top tips this week are Knitrun4sanity's knitted wire bracelets (loving the larger beads!); Woolly Tale's absolutely adorable (and very lucky!) needle felted mouse; Picto's fairy doors (what a lovely idea!); and Blue Forest Jewellery's bubble rings. See you next week kids!
Posted by EleanorLucy Millinery at 04:19